Home » Blog » How Close is Cannabis Legalisation in the UK?

How Close is Cannabis Legalisation in the UK?

You’ve maybe guessed that we sell cannabis. It is in the form of hemp, but it is still cannabis.

We are asked very often: ‘When is weed likely to be legalised in the UK’? The answer is a little bit complicated, unpredictable and quite long. So make sure you’re sat back, have a nice warm cuppa in hand and blunt for the kicks.

The History of Cannabis legalisation

Cannabis was first prohibited as a drug in 1928, then again with more stringent legal restrictions in 1971.

Things seemed promising in 2004 when the Labour government announced that they would be downgrading cannabis from a Class B drug to a Class C drug. This effectively reduced the penalties for possession and gave strong signals that the UK government were taking a much less serious line on Cannabis. This was thrown out under Gordon Brown who re-classified cannabis as a class B drug in 2009. Disappointing.

The penalties from possession shot up from 2 years to up to 5 years (and/or an unlimited fine) and being involved in supply could mean 14 years in prison. Again, the UK government set the clock back of weed legalisation in the UK by a number of years.

In recent times – the UK government has been put under pressure by the trend of global cannabis legalisation, and many countries around the world (such as Thailand). Despite the pressure, the UK is dragging its feet.  Despite changes to the law in November 2018 surrounding medical cannabis, the process of obtaining a prescription is painfully slow and there are many who are still campaigning for the right to access medical cannabis in the UK. This is without mentioning that the legal cannabis market has suffered from a significant lack of trust, thanks to supply issues and contaminations: the Police have also been recorded to treat medical cannabis users in the same way as has always been the case.

As you can imagine, this has pushed many medical cannabis users underground into the black market economy – where they face the risk of prosecution and criminality. The more noticeable side effect of users flooding their cash into the black markets are gangs, violent crime and higher demand on police time. It is estimated that this community in the UK consists of 5 million people and the underground industry churns along to the tune of £6 billion.

All the while the UK government is imposing the threat of jail on cannabis users, the UK is the largest exporter of medical in the world. The absurd double standards are thankfully creating some noise and the UK is edging ever closer to weed legalisation.

What do the People say about Cannabis Legalisation?

We strongly believe in cannabis, and we believe in people making the right choices for their lives. And it seems that ‘the people’ are much more behind UK cannabis legalisation than the government would like to admit.

A recent Yougov poll set out to understand to what extent would the general British public support or oppose legalisation. These figures are particularly interesting: 20% strongly support, 32% tend to support, 15% oppose and 17% strongly oppose. 15% didn’t know 🤷‍♂️. 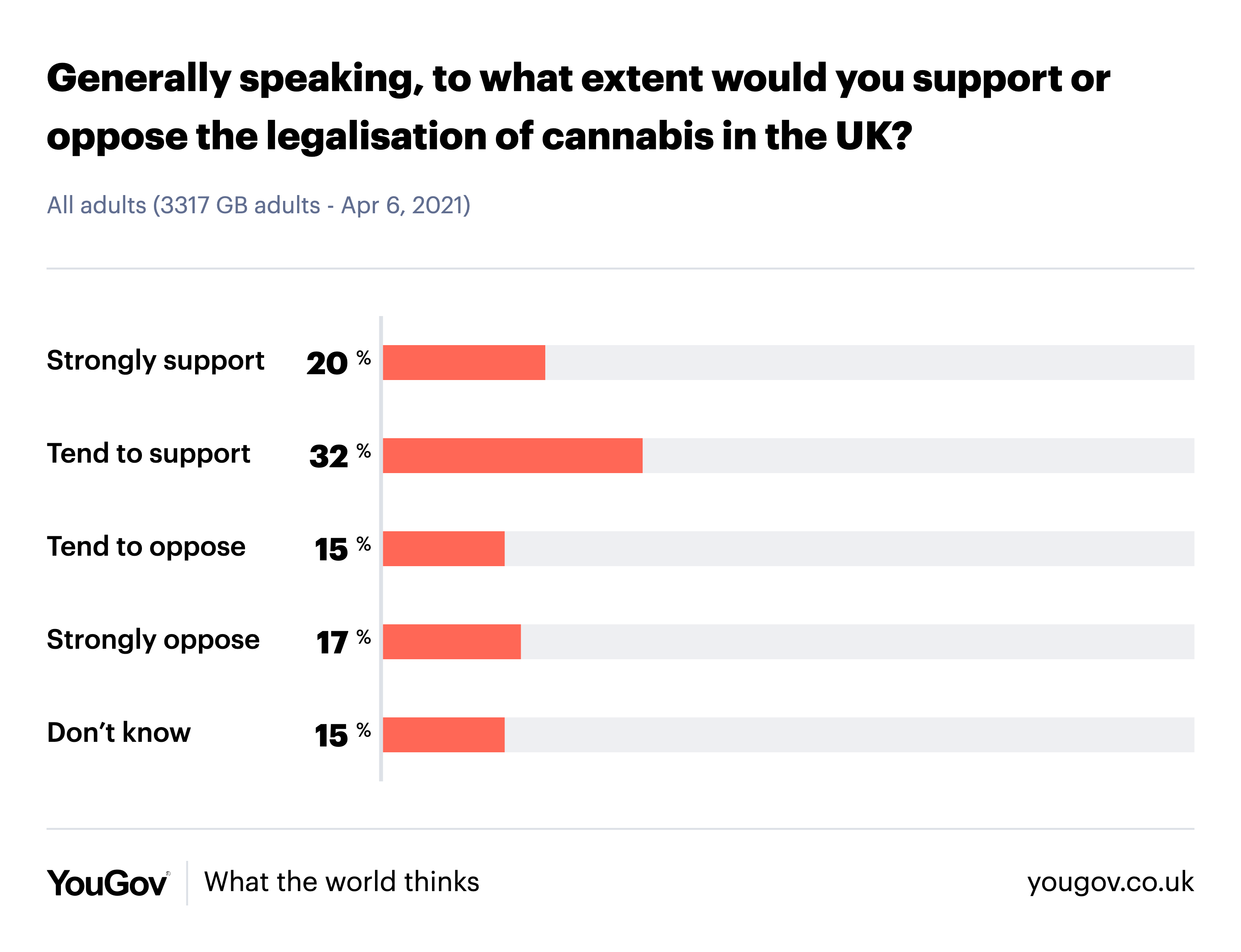 To us, this builds up a really good picture of the demographics who feel strongly on the matter; and thankfully, it looks as though the generations to come are much more accepting of cannabis law reform… and actively want the laws to change.

Other than the important sharing of cannabis knowledge, and the acceptance of science which points to the fact that cannabis is not nearly as harmful as had been first portrayed, there are a few keystone cases that are quickly gathering support for the legalisation of Cannabis. Karen Gray’s fight for her son’s medical cannabis prescription is an example of an issue that is pushing the needle firmly towards legalisation.

In short, only 32% of those who took part in the poll voted against the movement.

While the laws are written in the sacrament, the reality on the ground in the UK is much different. The law states that possession of cannabis could mean a 5-year prison sentence, and police are entitled to issue on the spot fines.

From personal experience and the general attitude of police enforcement, it seems as though the police do not see cannabis possession as a major criminal offence. Many forces have officially stated that they will enforce the law to the officer’s discretion and much prefer to use community lead resolutions; in short, dealing with cannabis use in a non-criminal way.

In the past, we have spoken to police who feel as though cracking down on cannabis users is a waste of their time. This is backed up by a 2005 report which estimated nearly 200,00 hours of police time was saved during the years when cannabis was a class C drug.

We can argue – with good merit- that the police also share the people’s desire for cannabis law reform.

What Does The Government Say (About London Cannabis Legalisation)?

As it stands, the current administration does not seem to want to budge on their position on cannabis (not surprising considering their voter base are the most likely to oppose). The current PM, Boris Johnson, has made it clear that he does not intend to move UK weed legalisation forwards; despite many claiming his own personal opinion (and actions) do not reflect this move.

Mr Johnson, has in the past, spoken on the record about his ambivalence for the current legal framework. A recorded interview from 2000 shows him discussing his thoughts – which is strangely no longer available on youtube.

Downing Street made their statement after London Mayor Sadiq Khan pledged to bring forward discussions on the decriminalisation of cannabis in London if he were to be re-elected this year (May 6th 2022). He pledged to introduce a new committee of experts from criminal justice and public health to examine the harms of the drug and to understand how effective the current government policy is.

Could this mean UK weed Legalisation in 2022 or 2023? We’d at least keep our fingers and toes crossed.

The Liberal Democrats are the furthest forward in terms of cannabis reform – and they continue to work with community leaders to understand the best possible policy on how to regulate, tax and legalise weed. Hopefully, the current government/opposition’s dearth of talent may help them rise through the cracks.

We would love to think so – and would put money on it. It is exceedingly clear that the world is changing its position on cannabis.

Uruguay was first (2013), followed by Canada (2018) and nearly all states in the USA have decriminalised or legalised cannabis. While the US federal law still classifies cannabis as a controlled drug the mood is changing quickly with President Joe Biden stating that he wishes to see cannabis decriminalised and convictions expunged. A huge 67% of Americans also believe it should be legal – let the people speak!

The dominoes in Europe are falling too: Malta legalised in 2021 and Germany announced early in 2022 that it will be legalising cannabis. The laws are also set to change in Switzerland, Luxembourg and countries such as Portugal, Spain and Italy have all but decriminalised cannabis completely. It is clear that a wave of European countries legalising cannabis is on the horizon.

The UK is indeed the biggest exporter of medical cannabis in the world, and for sure, will not wish to miss out on the potential economic benefits that will surely come from cannabis reform.

A Reuters article and report estimates that cannabis could be worth 4 billion and would support 27,000 job. With post-COVID economies floundering, and the prospect of long hard years ahead, cannabis could be more than a remedy for all that sleeplessness.