Welcome to another edition of ‘get high and know what to expect cast’ and another addition to our strain profile pages – so that you can read everything you need to know about any strain before trying it yourself. 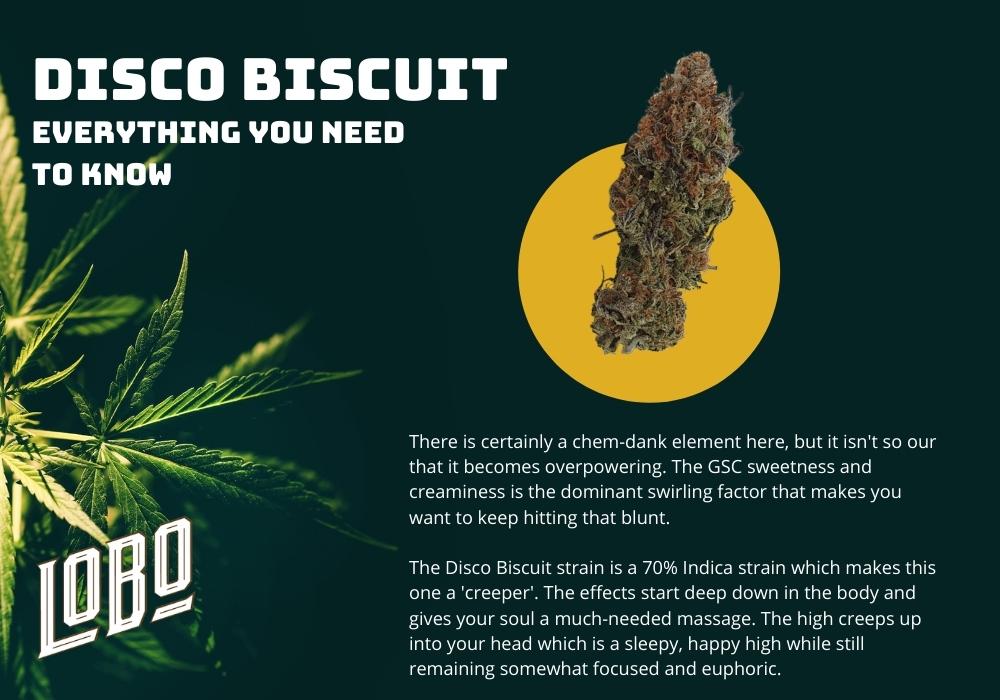 Today, we wanted to talk about a strain that is a little bit different from the classics. The Disco Biscuit strain is one of those wonderful strains that quickly gathers momentum in the underground and cements a reputation for being a spectacular bit of bud. The strain is the brainchild of Underground Originals. An experiment of crossing Girl Scout Cookies and UGORG1 won multiple accolades and awards and earned its Disco Busicuit name.

Disco Biscuit is the proud recipient of: 3rd at Masters of Rosin (2018), 2nd Ice Water Hash: Monsters cup (2018), 2nd Highest THC Flower and 2nd indica at the Spannabis Awards in Madrid (2017) and 1st at the Peoples Choice (Hybrid) and Water Hash at the Elite Cup in Amsterdam.

The Disco Biscuit strain is a 70% Indica strain which makes this one a ‘creeper’. The effects start deep down in the body and gives your soul a much-needed massage. The high creeps up into your head which is a sleepy, happy high while still remaining somewhat focused and euphoric.

We know the Girl Scout Cookies strain very well, but we are unsure of the characteristics of UGORG1. The interweb is light on information about this strain, but we know it is a unique creation by Underground Originals too. It is a hybrid of Cheese and Blues.

How GSC and UGORG1 come together is harder to identify than you’d maybe expect. If you imagine the effects of GSC with a little bit more buzz – a very unique buzz that you’re unlikely to have experienced before. It is interesting to us that the strain has been named after something that (we know in the UK) is a party drug.

Let’s talk about flavour: There is certainly a chem-dank element here, but it isn’t so our that it becomes overpowering. The GSC sweetness and creaminess is the dominant swirling factor that makes you want to keep hitting that blunt. There is so much funk in a Disco Biscuit blunt that everybody is going to want some. If you’re chilling out with friends then everybody is going to get really smelly, and if you’re in a closed room, Febreze is going to be your best friend. This stuff scream cannabis from the moment you toast the tip of your joint.