For anybody who is even remotely new to Cannabis, you may be asking yourself what is the difference between Sativa and Indica plants? It is something we are asked a lot and a topic we have a good understanding of.

It is best to start with the basics, there are three main cannabis plant types: Sativa, Indica and Hybrid. We feel that understanding the strains is particularly important when tailoring your cannabis use. If you understand what each strain does, then it is easier to navigate the sometimes overwhelming world of cannabis products.

So, let us dig into what Indica, Sativa & Hybrid plants are and why they are different?

What is the difference between Indica & Sativa?

More generally speaking, Sativa and Indica represent old-school categories of cannabis plants. While there are some cross overs but the two are separated by their effects and physical appearance. 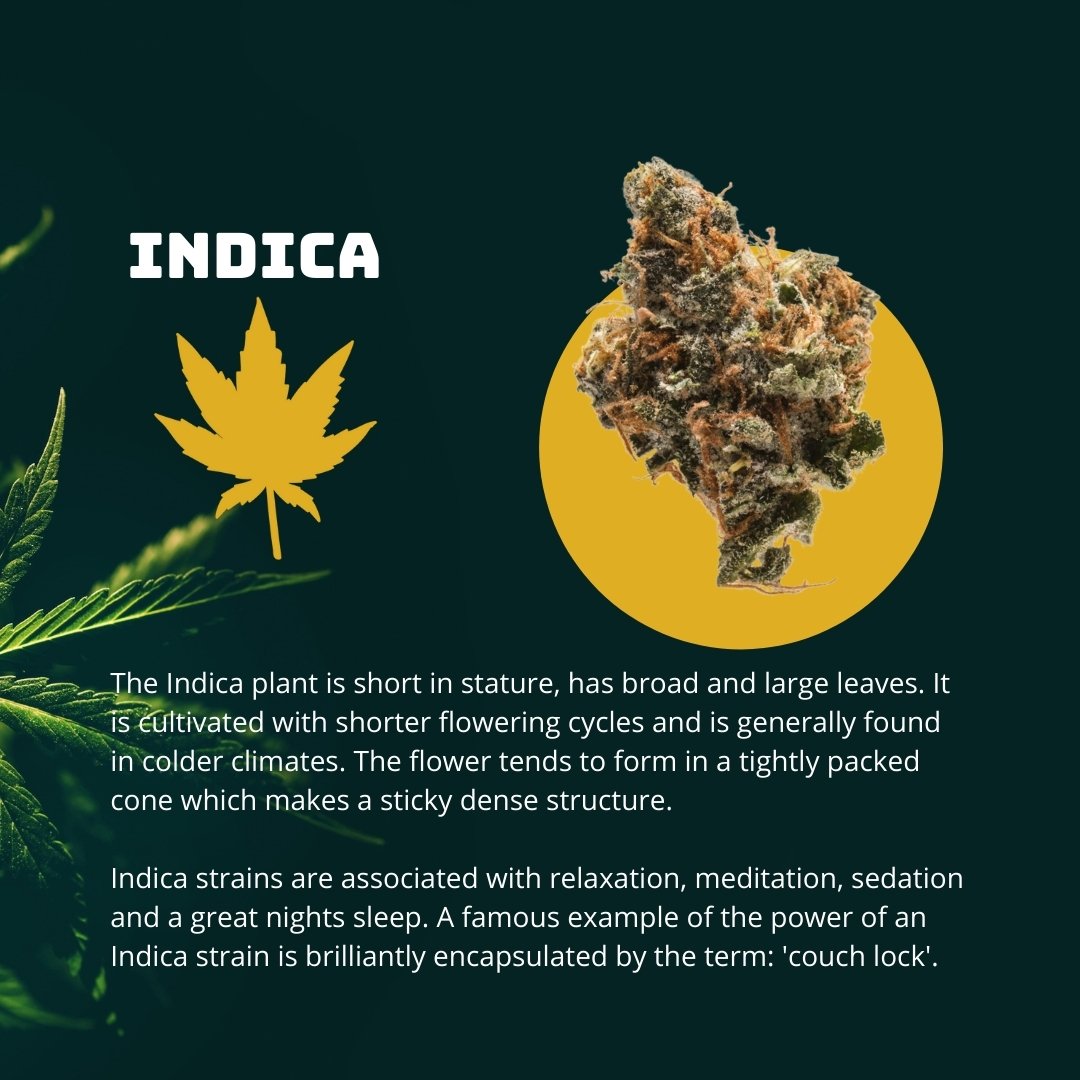 The Indica plant is short in stature, has broad and large leaves. It is cultivated with shorter flowering cycles and is generally found in colder climates. The flower tends to form in a tightly packed cone which makes a sticky dense structure.

A Sativa plant is much taller, has narrow leaves and is cultivated with longer flowering cycles. The Sativa plant also generally prefers warmer climates, but this isn’t always the case.

The most noticeable difference between the Indica and Sativa plants are the effects each are associated with. Once again, there are many examples where the rules do not fit, but generally, each strain falls within its category.

Now that we know more, the chemical make-up of the plant is much more important than its given category.

Indica plants are famous for being associated with relaxation, meditation, sedation and a great nights sleep. A famous example of the power of an Indica strain is brilliantly encapsulated by the term: ‘couch lock’. Some Indica strains are potent enough to ‘glue’ you to your seat and sedate you for the evening. Indica Strains could be Northern Lights or Granddaddy Purple.

A Sativa plant is associated with the opposite effects; an uplifting, euphoric, cerebral, creative, energetic feeling which is ideal for the morning, social events or late-night parties. The effects of a Sativa plant is entirely dependent on the strain, there are some which are ideal as a replacement for a morning coffee, others that make mundane tasks (like cleaning) a breeze and some that are so cerebral in their effects that they are almost psychedelic. The range of effects are very far-reaching.

Finally, the most abundant of all is the hybrid plant. This is a breeding of both Sativa and Indica plants together. The most popular strains in recent times have all been hybrids, mainly as hybrids are bred to make the best of both worlds. Some are relaxing yet energetic and others are euphoric and cerebral without being too intense. There is almost certainly a hybrid for everybody.

When it comes to hybrid strains, it is best to research the particular strain you’re interested in.

Other Factors to Consider

While using the Sativa and Indica connotations makes a conversation with a fellow canna-isseur easier, they do not fully represent the truth. The categories are somewhat of a generalisation.

The most important factors which determine the effects of any strain are the ratio of cannabinoids present and the terpene profile.

Cannabinoids interact with each other in ways we do not yet fully understand. Some work together, and others regulate their effects. CBD in fact helps to mitigate much of the psychoactive effect of THC, so a strain with a high CBD content will be very different to one which contains nearly no CBD.

Terpenes themselves are also therapeutic and can also change the way the body uses cannabinoids. While some terpenes can invite feelings of relaxation, and serenity, others invigorate your body and mind. There are some examples of ‘classical’ Sativa strains having a sedative effect and visa versa. Our understanding of cannabis is still too limited to understand all of the factors at play.